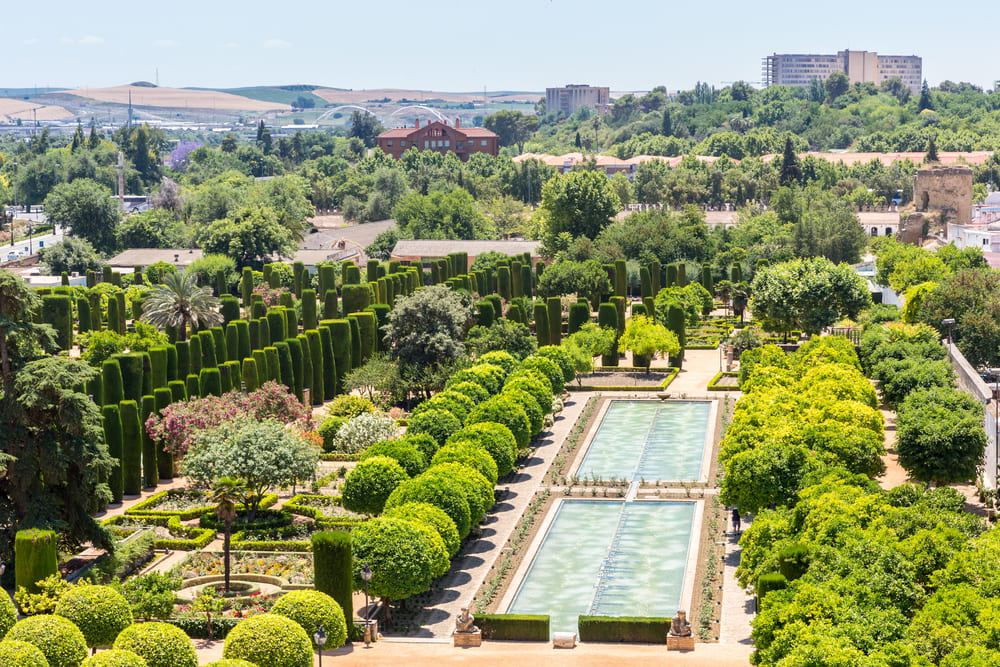 ALCAZAR OF THE CHRISTIAN MONARCHS

To the south you will find the river Guadalquivir, to the west the Royal Stables and San Basilio Neighborhood (formerly the Antiguo Corral de los Ballesteros and Alcázar Viejo), to the north the old Jewish Quarter and to the east the Mosque-Cathedral of Córdoba.

This is the location of the Alcázar of the Christian Monarchs, an ancient fortress that became the residence of the Catholic Monarchs for eight years. During the Al-Andalus period it became the home of emirs and caliphs, in the Visigoth era it was the residence of the governor, and in Roman Corduba it functioned as Customs for trade deals on the river Betis.

Its construction was ordered by Alfonso XI in 1328, with the intent of using it as both a defence mechanism and as a royal residence. The Alcazár was declared a Cultural Interest Heritage site within the historic centre of the city of Cordoba in 1931, and UNESCO subsequently declared it a World Heritage Site in 1994.

As for its structure, the fortress has a partially quadrangular floor plan and four towers in each corner. In the gardens you will find three large pools and the Paseo de los Reyes (Path of the Monarchs; formerly the Huertas del Alcázar), with statues of the monarchs that once resided in the Alcázar. At the end of the path you will find a statue of Isabel and Fernando meeting Christopher Columbus.

TOWER OF THE LIONS: Located by the entrance door, in the northwestern corner, and dating back to the 13th century, it is the oldest of the towers. This tower provides access to the north wall and is connected to the Tower of Tributes. Though a considerable amount of time is required to get up and down this tower, the views from the top are spectacular.

INQUISITION TOWER: From 1483 the monument became the seat of the Holy Inquisition or Holy Office. This tower was used as an inquisition archive. It is located in the southeastern corner.

TOWER OF TRIBUTES: This is where the king’s proclamations took place and where the army’s banners, standards and flags were kept. It is located in the northeastern corner.

TOWER OF THE DOVE: Renovated at the end of the 20th century, also known as the Tower of the Dove, it is located in the southeastern corner.

The interior rooms are structured around courtyards, like many of the houses in the historic centre of the city. In most of the galleries you will notice Gothic vaults, renovated from the 1950s onwards like the rest of the monument. We will be able to observe a Roman sarcophagus from the 3rd century A.D. With a door ajar, it is a reminder that in Roman culture access to the beyond was through the Gate of the Kingdom of Hades.

In the Hall of the Mosaics you will be able to observe depictions of Medusa, Polyphemus and Galatea, Eros and Psyche among others, dating from the second to the fourth century A. D., found in the Plaza de la Corredera.

The marble pavement and the murmur of its fountains make the Mudejar Courtyard a place of extreme beauty, a place where the Catholic Monarchs strolled during their stay in Córdoba.